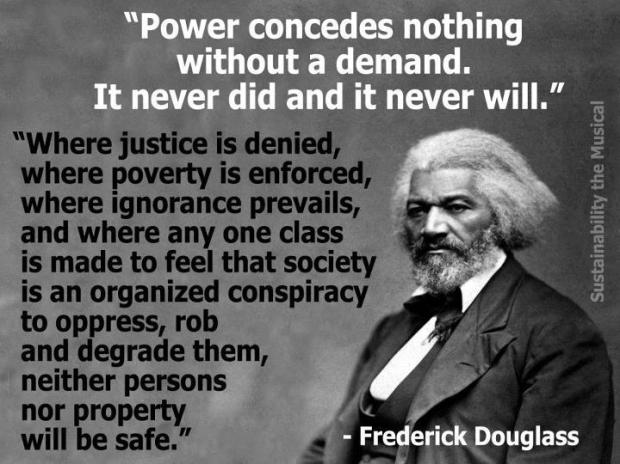 The Gates Foundation is run by the world’s richest couple who wield their power through wealth and status, force-feeding their agendas on those of us without our consent.  So what do we do about that?  Frederick Douglass’ wise words may be the key.   Is Frederick Douglass right?  Is it true that power will concede nothing without a demand?

Code Pink, a grassroots women’s activist group, recently demanded the Gates Foundation divest from the G4S Israeli Prison.  Activists  around the globe engaged in social media and creative, bold protests on the ground.  Bowing to public pressure which threatened their status and wealth, the Bill and Melinda Gates Foundation have finally divested completely from the G4S Prison.

‘ The Gates Foundation Asset Trust, the entity that manages the investments for the $40.2 billion Bill & Melinda Gates Foundation, has liquidated its entire stake in G4S Plc (GFS), the world’s biggest security-services provider.

Clearly this is a success for Code Pink activists.

Heavy protests were held around the world on May 24th in the International March Against Monsanto. (Watch video)  Protesters marched to the Gates Foundation in Seattle, demanding they divest from Monsanto.  Based on encouraging reports like the one below, we can hope that the Gates will also completely divest from Monsanto in the near future as we increase pressure on them through creative resistance.

“No longer dominated by the traditional “Big Green” groups that were taking big donations from corporate polluters, the new environmental movement is broader, more assertive and more creative. With extreme energy extraction and climate change bearing down on the world, environmental justice advocates are taking bold actions to stop extreme energy extraction and create new solutions to save the planet.  These ‘fresh greens’ often work locally, but also connect through national and international actions.

The recent national climate assessment explains why the movement is deepening, broadening and getting more militant.”

But what is so hypocritical about the rhetoric and the actual Gates’  investments?  Mother Jones wrote about  what they called “the most egregious hypocritical investments” of the Bill and Melinda Gates Foundation, noting their rhetoric is one thing, while their actions and investments were quite another.

Bill and Melinda also claim their foundation’s investments are for improving civil rights, but are they really? Rhetoric or reality?

In a speech to the Urban League in 2011, Gates discussed civil rights as it relates to education, promoting his corporate reform experiments on our public school children, but not on his own… as reported by Bianca Vázquez Toness:

“Education may be the hardest civil rights fight of all,” Gates said. “Discrimination is harder to prove and people often don’t know what levers to pull to fix the problem.”

Gates has been looking for the right levers for years and has made some mistakes. He poured approximately $2 billion into breaking large high schools into small schools, believing that students would get more attention. Two years ago, he acknowledged this wasn’t the panacea he had hoped for.”

How about the Gates Foundation’s latest experiments?  Are they the panacea for civil rights?  Are the Gates couple pulling the right levers?

Anthony Cody, retired NBCT, M.Ed. and  education activist,  wrote a post titled “Devastating Report Condemns Corporate Reform as Civil Rights Fraud” —  timed with the 60 year anniversary of Brown v Board of Education. Clearly, the Bill and Melinda Gates Foundations experiments have once again proven not to be the “panacea” and in fact have caused irreparable harm to our nation’s civil rights advances.

Like their private prison investments which ended up aiding the torture of prisoners, the Bill and Melinda Gates Foundation’s investments in corporate education reform are causing irreparable harm to our children, families, teachers, public schools, communities,  civil rights, and democracy.  As a result, Teachers’ Letters to Bill Gates has a demand.  They demand the Gates Foundation DIVEST from corporate education reform on these grounds:

You and the OECD have much in common, Bill and Melinda. Your imposition of corporate reform policies, which are measured using a single, narrow, biased yardstick, are successful in one area only: making a profit for you, test companies, publishers, and the privatizing corporate reformers. Your policies continue to use our children as guinea pigs in your corporate reform experiments and risk doing “irreparable harm to our schools and our students”.

We the undersigned reject the Bill and Melinda Gates Foundation’s tight control of education policy. Venture philanthropy’s influence on public education has been all-pervasive and we demand an immediate restoration of democracy in our schools. Divest from corporate education reform.”

Exercise your right to demand the Gates concede power.  You too can apply public pressure.  Sign the demand to the Gates Foundation to DIVEST in the comment section on this link and Teachers’ Letters to Bill Gates will add your name to their letter.

Join the Washington Badass Teachers Association, Washington Save Our Schools, Teachers’ Letters to Bill Gates on June 14th for a Twitter Storm to educate and activate the public about the harm caused by certain Gates Foundation investments.

Frederick Douglass  is right: “Power conceded nothing without a demand.  It never did and it never will.”